A recent review of SWG camera trap images from Pu Mat National Park has turned up a sequence of a sun bear taken in September 2019. The species is known from flagship protected areas in Lao PDR, but this is only the second time it has been recorded in Vietnam in recent years.

Other recent bear records have all been of Vietnam’s other bear species – the Asian black bear. The other instance sun bear was recorded in Vietnam was at the other end of the country in a set of  photos from 2020 collected in Bi Doup Nui Ba National Park (more information on this see: http://www.izw-berlin.de/en/press-release/surprising-mammal-diversity-discovered-in-bidoup-nui-ba-np.html).

As well as being a significant record in its own right, the detection of sun bear in Pu Mat might also have something to tell us about our chances of finding saola through camera trapping. Camera-trapping has detected some of the rarest and most elusive mammals in the world, and has therefore been the focus of considerable saola detection efforts.

Since June 2019, we have had up to 36 cameras in a very small area of the park covering just 8 square kilometres. This represents a highly focused camera trap effort, with a camera trap density ten times higher than what is considered to be intensive in other academic studies. The total number of trap nights from just this small area alone was a little under 8200. We set the traps very carefully, with no restrictions on the site we chose and we were specifically trying to find large animals moving through. Despite all this, an animal the size of a sun bear could still go undetected for more than a year.

It’s likely the bear wasn’t in the area the whole time; it may have wandered in, perhaps from areas across the Lao border. However it is also likely that saola do the same, as knowledgeable local people around Pu Mat mostly tell us.

This highly intensive camera trapping we’ve done since 2018 covers only 2% of the area of the park because it’s specifically focused on the vicinities of three recent saola reports. In addition to this, less intensive camera trapping conducted by the Leibniz IZW and local partners, including FFI and SVW, has covered almost the entire park in 2018-2019. However, this new detection shows that, even when the numbers seem impressive and effort is high, the rarest species may still slip through the net. There’s therefore every chance that saola may survive. 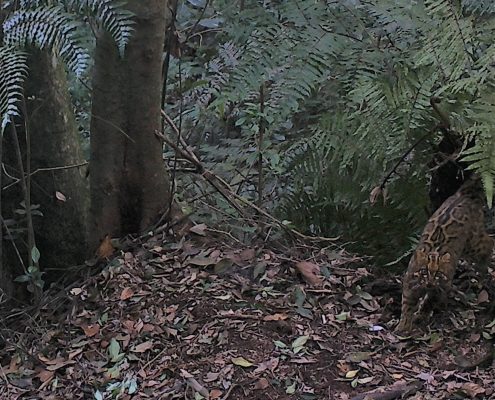 Other elusive species detected during the highly focused camera trapping effort included the marbled cat. This species was detected twice, with a whole year between detections

It took a long time to notice the sun bear photo because funding for the camera trap network ran out in 2020. At that point Dr Cao Tien Trung from Vinh University decided to channel departmental money to keep them running, but only sporadic checks were possible. It was also difficult to sort through the images but we were fortunate to receive the generous support of the Microsoft AI for Earth programme for this purpose. The identified images are just now being checked by Dr Nicholas Wilkinson who recognised the bear as a sun bear.