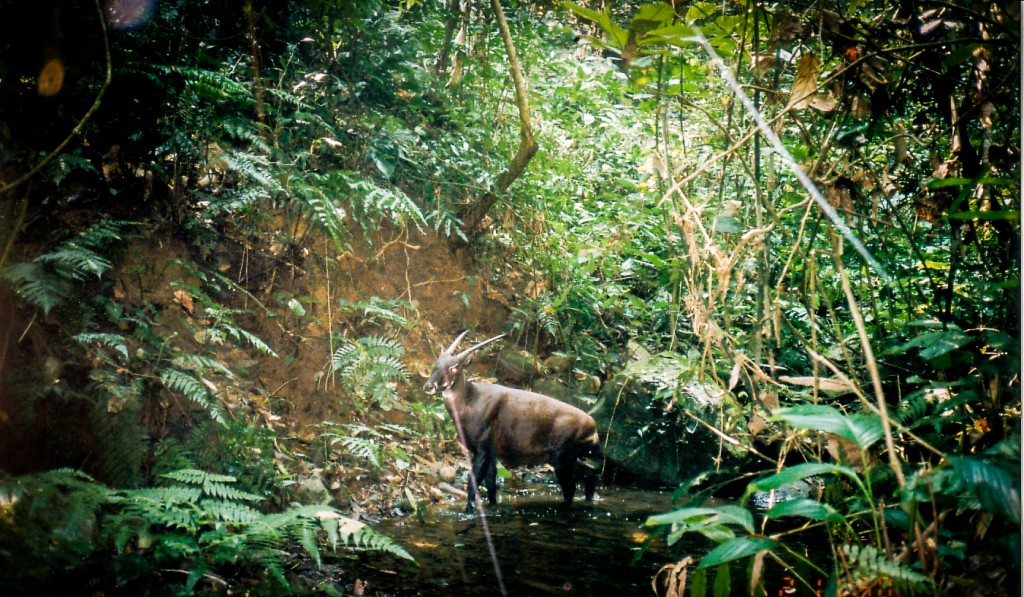 What is a Saola?

The Saola (Pseudoryx nghetinhensis) is one of the rarest large animals on earth.

It is the sole species of a genus of bovids, and has been known to science only since 1992.  Adults weigh 80-100 kg, and both females and males are characterized by long, gently curving horns, and a striking pattern of white markings on the head.  Its genus name comes from its resemblance to the oryxes, – antelopes of Africa and the Arabian Peninsula – but the Saola’s closely living relatives are wild cattle and buffaloes.

This beautiful animal is found only in Laos and Vietnam, in the Annamite Mountains along the shared border of the two countries.  It is a solitary inhabitant of deep, primary forest.  In the Lao language, saola means ‘spinning wheel posts’, in reference to the similarity in size and shape of the animal’s horns to the paired support posts of local spinning wheels used by villagers in its range.

We know Saola from several capture-trap photographs, a few short-lived captives, remains in villages (especially the animal’s spectacular horns) and, mostly, information provided by local villagers. Saola is by far the largest terrestrial animal in the world (of certain existence) that has never been seen in the wild by a biologist.  It remains an enigma into the 21st century.

Saola is listed as Critically Endangered (the last stop before extinction) on the IUCN Red List of Threatened Species.  The Zoological Society of London includes Saola in its global Top 100 (ranked at #44) of Evolutionarily Distinct & Globally Endangered (EDGE) species.

Due to Saola’s elusive nature and rarity, and the rugged, remote and densely forested terrain in which it lives, precise population estimates have not been possible.  Based on information from local villagers, the status of other large mammals in its range, and the frequency with which the animal is photographed by camera traps, best estimates are that, at most, no more than a few hundred survive (in multiple, isolated subpopulations), and the number might be down to just tens of individuals.

Given that there are no Saola in captivity, it may be the world’s most endangered land mammal. In fact, few animals in the world, if any, share Saola’s combination of four attributes:

Consequently, for those wishing to make a significant, incremental contribution to conservation of the earth’s biodiversity, among species Saola is a highly compelling focus for attention. The Saola occurs only in the Annamite Mountains, along the border of Vietnam and Laos. It has one of the smallest ranges of any large mammal.

In Laos there is evidence of occurrence in the eastern portions of Bolikhamxay, Khammouan, Savannakhet, Xekong and southern Xieng Khouang provinces.

In Vietnam there is evidence of occurrence in Nghe An, Ha Tinh, Quang Binh, Quang Tri, Thua-Thien Hue and Quang Nam Provinces. It is suspected to occur in no more than 15 forest blocks in the two countries, and quite possibly fewer.

In 1992, a joint team of Vietnamese government and WWF biologists conducted a general wildlife and biodiversity survey of Vu Quang Nature Reserve (now a national park), on Vietnam’s border with central Laos.  In the course of the survey, a member of the team encountered a pair of unusual horns in the house of a local hunter – unlike the horns of any animal then known from Southeast Asia.  The team eventually found and examined more sets of horns (some clearly from recent kills), and the full skin one of the animals, and realized they belonged to a previously unknown (to science) and highly distinctive species of large mammal.  In 1993, the team announced their extraordinary discovery in the journal Nature, in an article entitled “A new species of living bovid from Vietnam”.  Shortly afterwards, Saola’s occurrence in Laos was confirmed.  It was perhaps the most surprising zoological find of the 20thcentury.