THE ISSUES: Why is Saola Endangered?

Saola is threatened primarily by hunting, rather than habitat loss. The main hunting threat comes from commercial poaching, not subsistence hunting by local people.

In Southeast Asia, most endangered species of wildlife are threatened by targeted offtake for the wildlife trade, either for bushmeat or traditional Asian medicine. Paradoxically, Saola is one of few large animals in the region without a significant price on its head. Ancient Chinese and other Asian cultures never knew the Saola, and so it does not appear in their traditional pharmacopeias. But Saola gets caught up in the general slaughter, and they are killed incidentally, as by-catch. Particularly dangerous for Saola is the setting of thousands of wire cable snares in its range by professional poachers. The scale of the problem is staggering.

Since 2011, the SWG and its partners have focused on improving protection at five protected areas believed to be key for saola conservation, in Lao PDR and Vietnam. Since inception of the program, patrol teams recruited from local villagers have removed more than 130,000 wire snares from these areas. Yet still, thousands more snares remain (as the most committed poachers continue to reset them). Despite significant improvements in protected area management, and continual progress, no area in Lao PDR or Vietnam is yet sufficiently well protected to save viable populations of Saola.

A Saola found in a snare in Lao PDR in 2010 (villagers took the animal to their village, where it died a few days later). 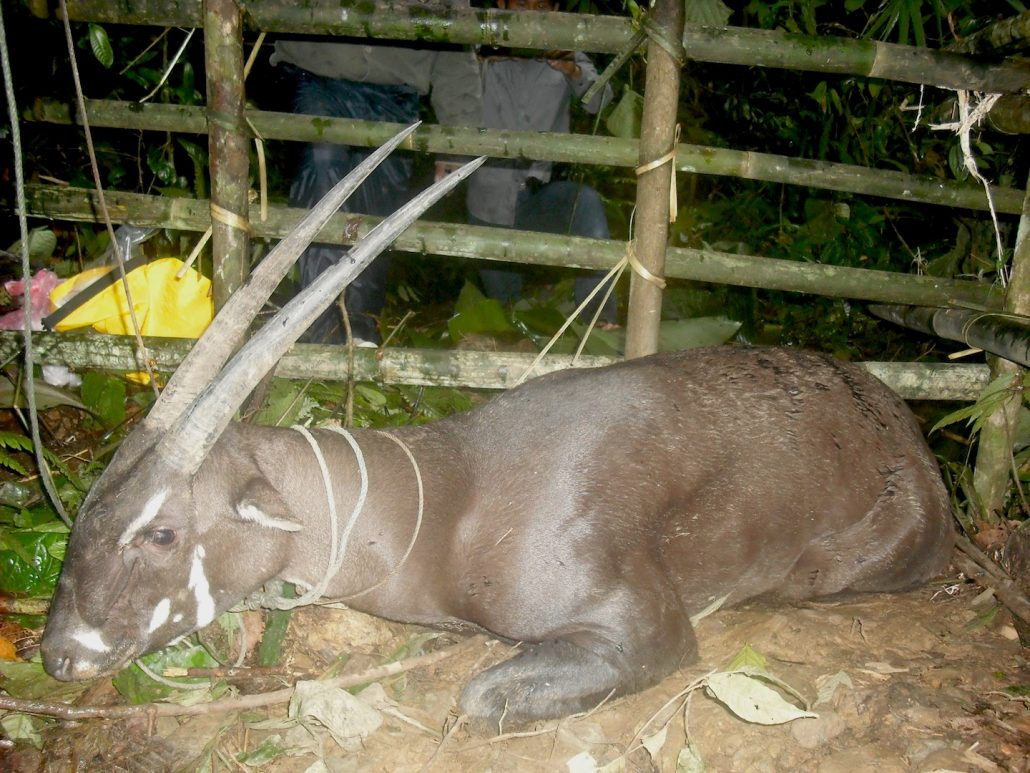 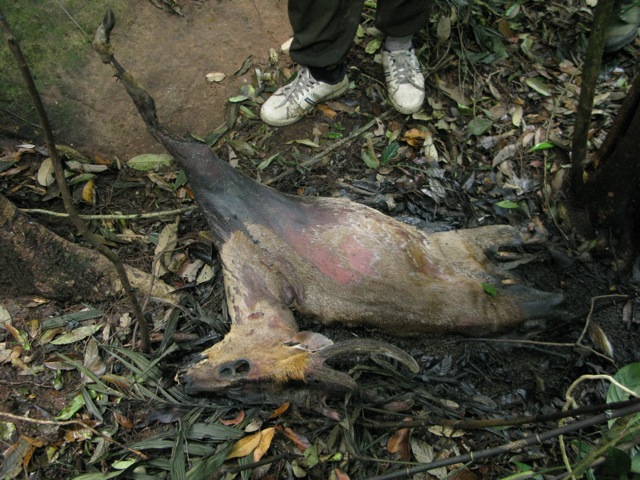 These subpopulations are now probably small enough to be threatened further by other affects, such as genetic inbreeding and loss of heterozygosity, skewed sex ratios, and difficulty of isolated males and females to find each other for mating. The results of an preliminary Population Viability Analysis, conducted by the Saola Working Group at its meeting in November, 2015, indicate that even if immediate cessation of all hunting threats could be achieved, it is likely that all Saola subpopulations would drift to extinction in the next 10 to 15 years.

Saola is also indirectly threatened by insufficient attention to and investment in its conservation, both by the governments of Lao PDR and Vietnam, and the international conservation and donor community.

This lack of attention is a limitation that the SWG in particular has worked, with considerable success, to change. The situation is now better. Still, the fact that remains that Saola conservation has not yet been attempted in a comprehensive manner. This beautiful animal risks going quietly extinct from insufficient attention.

Little demand for Saola in trade

Saola is not specifically targeted by the region’s wildlife trade.

The species is unknown in the traditional Asian pharmacopeia, it is not featured in wildlife restaurants, and although its trophies are sold, hunters seem not to target Saola for their horns. This is a tremendous advantage. Unlike the case for many other endangered species, poachers are not racing conservationists to find the last Saolas.

Potential for support from local people in its range

There is little or no economic opportunity cost to local villagers to conserve Saola.

A Saola has little cash value, the species is not an important source of meat, and it is not a crop pest (and so there are no human-wildlife conflict issues around Saola). It is also not found anywhere else in the world, so it has shown to have ‘pride’ value among local people. For these reasons, there is good potential to engage local villagers as partners in Saola conservation, compared to species that have high trade value, or are a threat to local human livelihoods. The degree of success to-date in engaging local people in Saola conservation varies across the species’ range, but the potential is real.

A close, cooperative relationship between the governments of Lao PDR and Vietnam

Saola is found along the shared border of only two countries, Lao PDR and Vietnam.

These two countries have an exceptionally close, cooperative and friendly relationship. In fact, few pairs of countries in the world, if any, have a closer and more cooperative political relationship than Lao PDR and Vietnam. Their habitual and collaboration significantly simplifies conservation of this transboundary species.

The Saola Working Group has partnered with the European Association of Zoos and Aquaria (EAZA) to draft an Action Plan for the Conservation Breeding of Saola, in consultation with the government of Lao PDR (GoL) and government of Vietnam (GoV).

Under this approach, a captive population of Saola will be established at centres built specifically for this purpose, first in Vietnam, and subsequently in Lao PDR.  At the same time, protection efforts will be expanded to secure key areas of Saola habitat for future reintroduction. The One Plan Approach will be key to saving the last Saolas, and ensuring that this species will once again thrive in the wild.