In the Chasing Saola Stories series, SWG member Nicholas Wilkinson will be re-counting his adventures this summer in Vietnam to engage local people in finding surviving Saola. The series installments will be posted bi-weekly. Villagers’ names have been changed to protect their identity.

We arrive at Mr. Hoang Meng’s house on my birthday at dusk and sit around in the yard. Dùng, carsick from the winding drive, half-sleeps on a bench while Dũng and the others watch a woman bathe a tiny naked child. Another woman kills and butchers a bamboo rat on the concrete.

Later two of the hunting dogs come over later and lap up the blood. They are quite different from the stocky bear-faced dogs belonging to the Thai hunters we stayed with on our last trip. They have long limbs, long faces and deep eyes; the word ‘hound’ seems appropriate. One, of course, has a foot damaged by a snare.

Dùng is studying both environmental management and English language at Vinh University where studying two degrees at once is not expected. Her English is good and that’s refreshing because my Vietnamese is still poor, even after all this time. Her name is pronounced a bit like ‘Zum.’ Dũng, on the other hand, is Trung’s older brother, thin-faced and capable. His name is pronounced the same but as if you suddenly fall over in the middle of saying it. 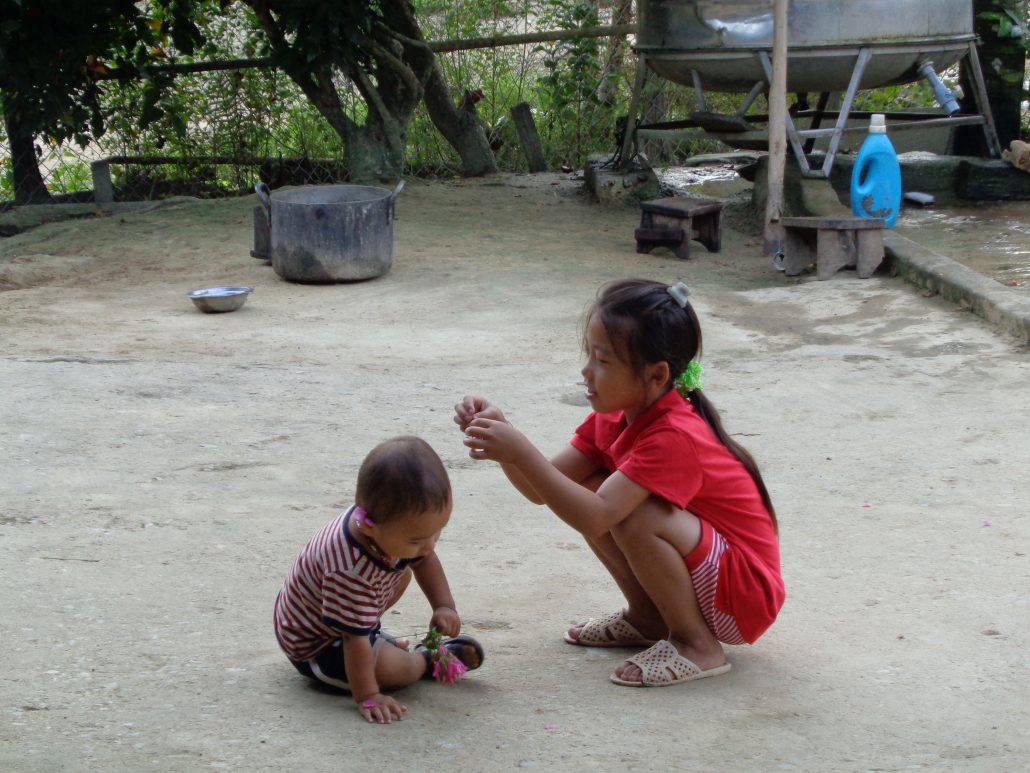 Trung had warned the students that the H’mong houses wouldn’t be as ‘nice’ as those in the Thái villages. This is true, I suppose, the Thái now almost all have very fancy stilt houses, with varnished pillars and painted birds on the ceiling. But this house is spacious and solid enough, built by the army out of rough vertical planks. Around the doors there are serrated strips of pale wood, which make the doors look like sharks’ mouths. The big door that leads to the living room has two great curving ones like crickets’ horns. I ask Mr. Hoang Meng about them over dinner as he slips a black nugget of squirrel into my rice bowl. As I’d supposed, they’re to keep bad spirits from getting inside and I’m happy to be right about that. In fact, we have quite a nice chat about it with Trung and I talking about the mirrors and horseshoes that serve the same function in our respective cultures until Mr Sơn, from the border army, says: “It’s all just tradition. Every ethnic group has its own tradition. They all do different things and it has nothing to do with spirits or anything, it’s just culture and it’s all fine and all ethnic groups can have their own culture. It doesn’t mean anything.” So that ends that conversation.

We talk about Saola and we drink rice wine. Dũng and Thoại had told me, based on their previous visit to this village, that two people–Mr. Kim and Mr. B’long–had seen two Saola somewhere in the headwaters of a certain stream. Mr.  Hoang Meng says there were three Saola: a mother, father and baby. As usual I look for a theory either way. Maybe he’s pleased by our interest and the promise of reward and thinks we’ll be more interested the more Saola he claims there are. Or maybe the baby was real but was killed and so they didn’t want to mention it before. The first one seems more likely.

I find these alternative explanations help me not to get stuck on one story but they tend to sound too rational. It’s well known how memories mutate. Maybe the male and female Saola conceived a dream child in his mind alone. Maybe they were conceived there themselves, though to be honest I doubt it. We will meet the people who actually saw these Saola–however many there were–tomorrow. But tomorrow there is going to be a party.

The whole village will be there, Mr.  Hoang Meng says, it’s an annual thing. We’re lucky, Trung says, because we can interview them all at once. Dũng and Thoại found it difficult on their last trip because everyone only came back from the fields at lunch or in the evening. The H’mong are hardworking, he says. It will start at eight tomorrow, says Mr.  Hoang Meng. Although actually it doesn’t necessarily start at eight, it starts when the thầy cùng says it does. I don’t know that word. 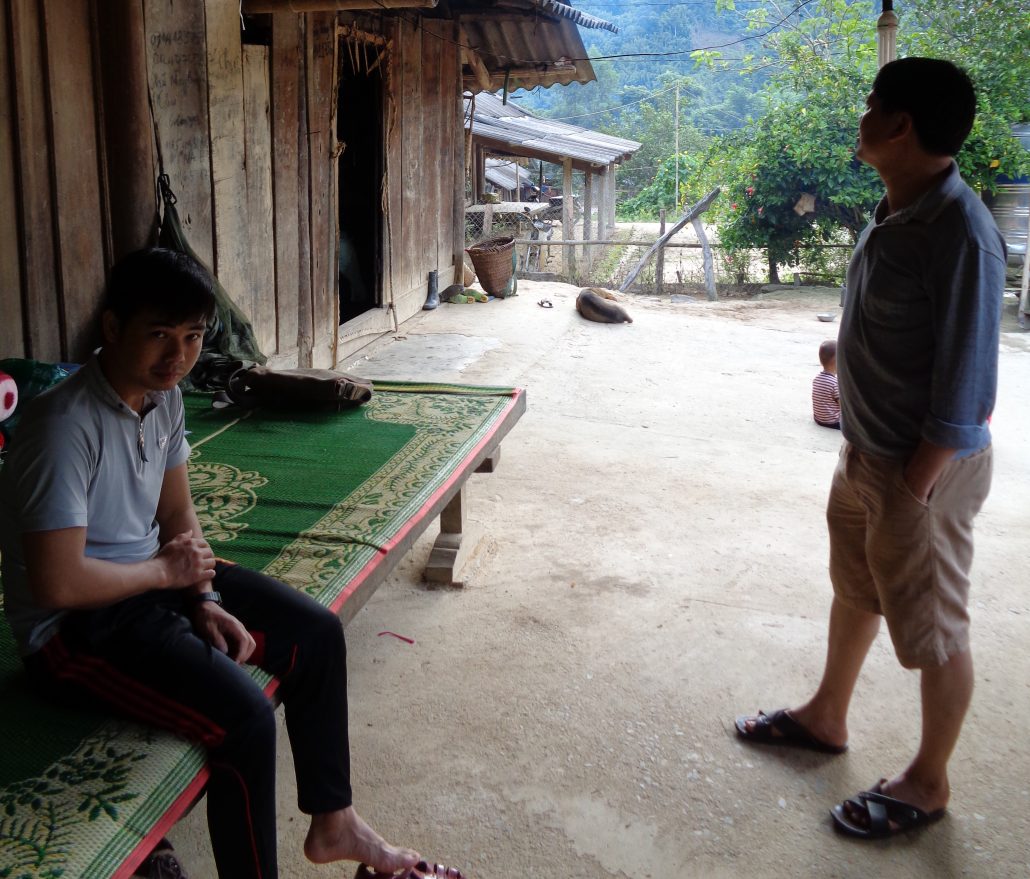 Thoai sitting on the daybed at Mr HM’s house. (Photo by Nicholas Wilkinson)

“The one who can talk to the god,” says Trung, “What is it in English?”

“Shaman,” says Trung. I’m not sure if he knows that word or not. He makes the fluid, triple-waving prayer motion that Kinh people make when offering incense at an altar.

That sounds interesting. Also, I gather, it involves a goat. The goat is certain not to survive the experience, of this alone I am sure.

I insist the girls take the proper bed inside. The boys (and men) will take the day bed in the yard. Everyone in the mountains has beds made of massive slabs of wood, reportedly so they can sell it to timber traders and yet still tell forest rangers it’s only a bed and not illegal timber. Still, I think most people see it as nest egg because the wood is rubbed glassy-black by long use. There’s always a plastic mat of woven green and yellow plastic straws, which I suppose is slightly more yielding than bare timber. I put up my hammock between the fence and one of the planks of the house. The dogs sleep under it but they don’t sleep very well and consequently neither do I. Also I’ve tied the hammock poorly so it sags.

This is my excuse for what happens the next morning.

(Top photo: Road to the village. Photo by Nicholas Wilkinson)