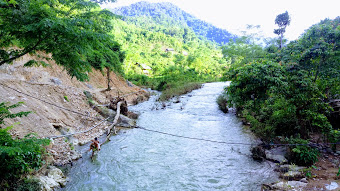 In the Chasing Saola Stories series, SWG member Nicholas Wilkinson will be re-counting his adventures last summer in Vietnam to engage local people in finding surviving Saola. The series installments will be posted bi-weekly. Villagers’ names have been changed to protect their identity.

Coming up with a protocol for interviews, training people in doing interviews and actually trying to do some useful interviews aren’t really things you should be doing at the same time. But time is seriously restricted. On previous trainings, I’d always been able to get the whole team watching the first interview in a relatively controlled setting, i.e. not a party. We should be doing this with Mr. Hoang Meng in the morning before the party, but he’s disappeared. Anyway he’s already given us information over dinner and we can’t just ask him again. Instead, we have a briefing session sitting around in the yard and, of course, when we get to the party, everyone just spreads out.

The ceremony has started in another house near a muddy crossroads, which I guess is the village center. The house looks the same as Mr. Hoang Meng’s house. They all do. Some students go to interview the older men squatting outside the house while others approach the young men and boys standing around in the road and on the volleyball court. None of us go inside to where the shamans are dancing—at least not yet.

Immediately I hear the word ‘Saola’ coming from all quarters and curse myself. 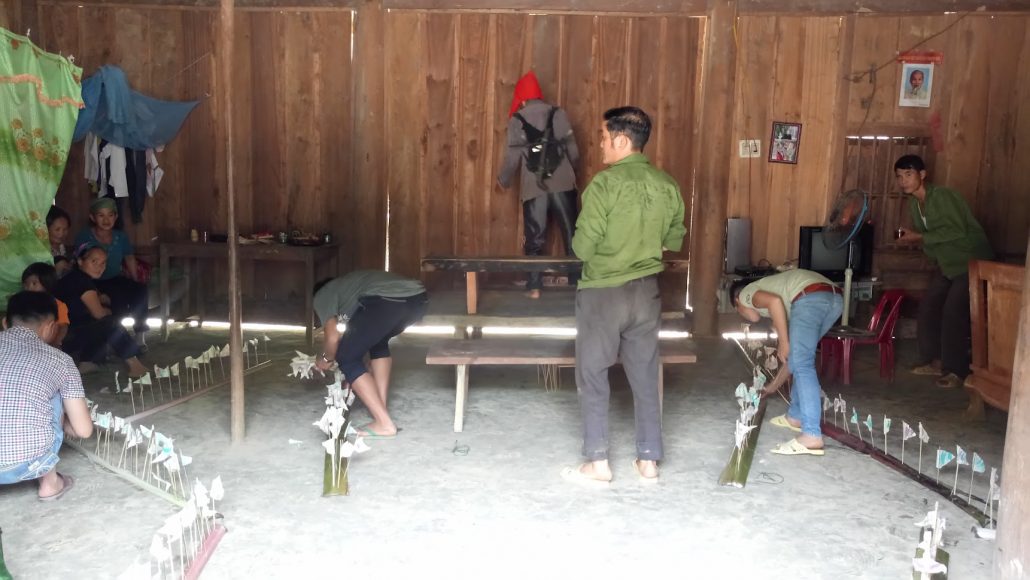 Flags for the ceremony. (Photo by Do Van Thoai)

Pro tip: if you’re trying to find out information from local people about some particular rare animal species, probably don’t start by mentioning that species by name. In the places where I’d worked before, I had to work hard to make sure my official papers didn’t bear the word ‘Saola.’ Otherwise the village headman would read them and then introduce you to some community elder with “this westerner is looking for Saola—you know a lot about animals so tell him about Saola.” The elder then looks like he’s letting down the village if he says he’s never heard of the beast.

Cutting my losses, I hover behind Thoai and Huyen as they talk to some of the younger guys (we want recent sightings, not traditional lore). It seems we are talking to Kim, the same guy that Dũng and Thoại met on their last trip. He’d told them then that he’d seen two Saola in last year’s dry season (theoretically that’s October through April of 2016) on a hunting trip with Mr. Hua. The animals were 1 or 1-and-a-half days from the village on the left side of Khe Kheng and he chased them with dogs and a gun but they got away. But, in that previous interview, Kim was just confirming the story which Hoang Meng gave, while Hoang Meng was there. And that wasn’t the same as the story Hoang Meng gave us last night. For one thing, Thoại and Dũng had got the impression last time that Hoang Meng had been there himself as well as Mr. Kim and Mr. B’long but last night he’d said otherwise. This kind of thing is pretty normal.

Now Kim tells us that, not only was Mr. Hoang Meng not there, but neither was Mr. B’long–whoever he is. In fact, the party consisted of himself, one Mr. Vu, Mr. Kong and also a local rubber-worker who’s since moved elsewhere. Furthermore, all Kim saw himself was the animal’s dung. He says it was different from a Serow’s dung, which is goat-like and was more like a cow’s. That’s an interesting detail I haven’t heard from a hunter before. The part about chasing the Saola and losing them was true—a recent landslide got in the way—but it was Mr. Kong who saw the animals, not Kim. That makes the next question obvious: where’s Mr. Kong? Turns out he’s standing right behind us.

For a hunter, Kong has an oddly soft, round face and it makes his wariness seem merely self-effacing. We get from him a broadly similar story—he’d gone out from camp with just his dogs when he found two adult Saola, lying in the sunlight of a clearing made by a recent landslide. The dogs gave chase but—and I think I’ve got this bit right—it was hard to follow the Saola over the soft earth of the landslide. They had long horns. 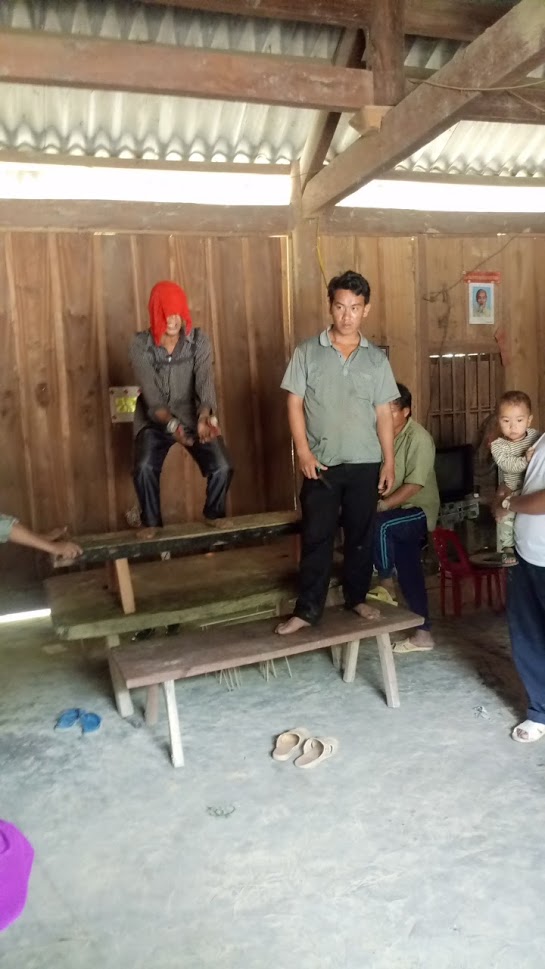 Ready for the big reveal. (Photo by Do Van Thoai)

“They had long horns” is the kind of simple phrase you often find yourself wondering about later. Did he mean ‘they had the long horns typical of Saola—and therefore they were not Serow.’ Or is it rather that ‘their horns were particularly long, even for Saola.’ Or perhaps that ‘they had long horns and were therefore adult?’ In this case it’s made clearer by his statement that he’s never seen Saola before, so it’s probably the first one. According to Trung, he’s one of the two top hunters in the village, though I’m not sure who told Trung that. But then he’s also quite young and there are claims—though I’ve always distrusted them before—that Saola were naturally rare or absent from this area, even when still relatively common elsewhere. So he could well be a good hunter and not have seen Saola before. The problem is, how sure can we be that he knows what a Saola is?

He gives us a description that is…okay. It’s not great, but there’s nothing definitely wrong with it. He says Serow are called ‘Sai’ and there are two kinds—those with white lower-legs and those whose lower legs are red or yellow. That describes known variation within the Serow in the Annamites. It isn’t reason for us to divide them into separate species as Kong seems to. That doesn’t matter, his classification doesn’t have to match ours to show that he knows something about Serow.

Saola, apparently, is known as ‘Sai Tja’ with ‘Tja’ being a term resistant to translation into Vietnamese but possibly meaning something like ‘pointy’—the pointy Serow. Because of the horns, presumably. So far so good.

The horns are straight and the animal has two white marks under the eyes, as well as white on the flanks and belly. He explains this by indicating places on his own body, so it’s a bit open to interpretation. For example Dung thinks he said the animal has a white ring around the neck (not true of Saola) whereas Trung thinks he just meant this marking was somewhere on the neck (also not true, but not so strikingly wrong). I am trying to interpret Vietnamese, a subtle language that I still speak only haltingly and which Kong also knows as his second language. Did he really mean ‘ring?’ For that matter, did he really mean ‘neck’ as we would understand it? Perhaps he was referring to the white marks above the animal’s jawline. A language student like Dung, who hasn’t worked in the mountains before might misinterpret the less precise Vietnamese of a H’mong villager. Words often take new meanings in the mountains. On the other hand, a biologist like Trung, who knows what Saola really look like, and who also has a lot of confidence in the skills of hunters, might try too hard to make the description fit the picture in his head. So might I, for that matter, and the description has been through several filters and distortions before it encounters my own biases. I judge it ‘believable’ though by no means outstanding, and I don’t think we can do much more with it now. The more we make this into an interrogation, the more the account will get distorted and then those distortions are harder to straighten out later. I think we need to spend time in the forest with these guys. But we also need to ask around more. After getting some descriptions of dung, feeding sign and footprints, I go into the house.

A big man stands on a wooden bench atop a trestle table and dances while a thinner, older man sits beside him, rocking. Both wear red caps like Santa’s elf hats that cover their faces and both those faces are to the wall. The dancer sings as he dances and both the dance and the song just…continue. His oil-grey shirt is soaked with sweat but the dance, while vigorous, is also measured; it is not a wild dance. The undulation of his shoulders shakes his big bronze thumb-rings, which shiver with internal bells. The song has tread—it doesn’t quite set the hairs on the back of my neck up but I think it comes closer than any other music I’ve heard in Vietnam. “This is H’mong language?” I ask a youngish man sitting next to me in the corner. He says it is (well obviously) and is not thereby engaged in conversation. The dance and the chanting go on. One of our group notes how small the altar is, how meager its offerings seem to her. A Kinh altar in the lowlands would have several bowls of sticky rice on a big tin tray along with strips of boiled chicken and shot glasses of liquor. There’d be a thicket of incense sticks in the bowl. This is just a little table with some glasses on and some things made of paper. 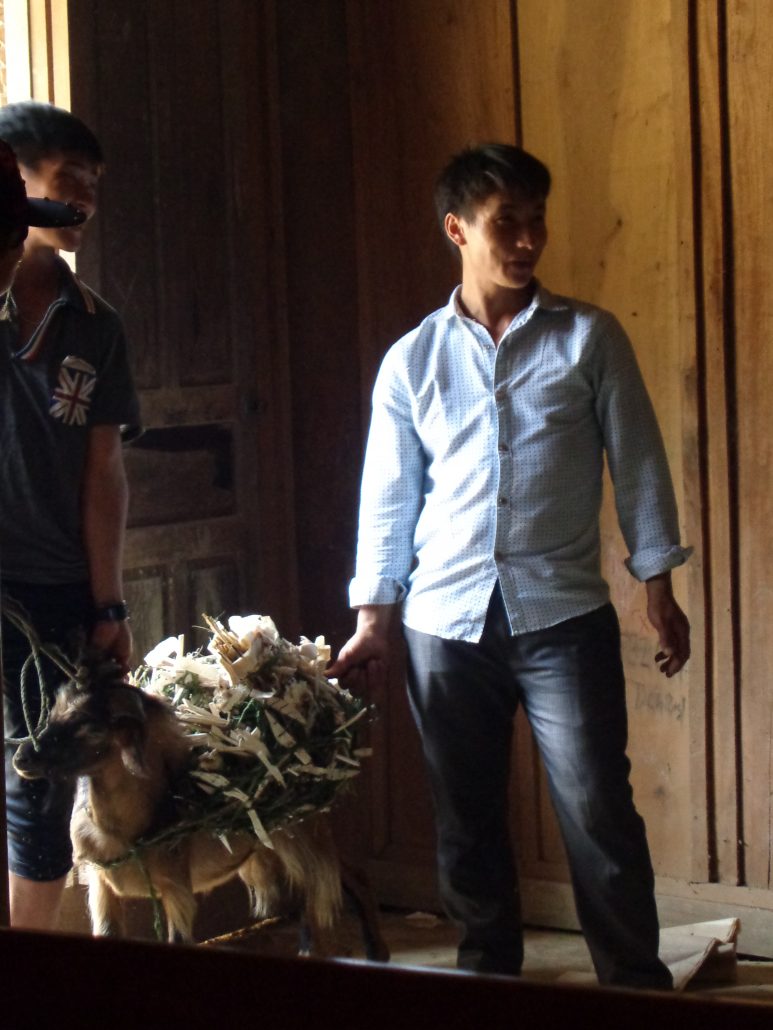 Goat in its finery. (Photo by Nicholas Wilkinson)

You can’t really talk in here so I go out but the people outside have either entered or dispersed. I come back in. The older shaman is dancing now and there is a sort of maze on the floor made of cut slivers of banana trunk with hundreds of small white flags stuck into their backs. I ask my laconic neighbor what this is about. “It’s just a thing we do,” he says, “it doesn’t mean anything. It’s like religion.” Then two men arrive in the doorway with a frightened goat that is laden with hundreds of butterfly-shaped things made of wood shavings. The big shaman in the oil grey shirt gets off the bench and removes his hat. Turns out it was Mr. Hoang Meng all along. The goat, I gather, is going up the hill but we don’t have to follow yet. Fortunately. I don’t want to watch the slaughter.

We end up going back to Mr. Hoang Meng’s for lunch. I’m wondering whether I’d have handled the morning better if I’d had a good night’s sleep but one of the students who took the inside bed tells us she was woken up by ‘a mouse dancing on her face.’ So, swings and roundabouts.